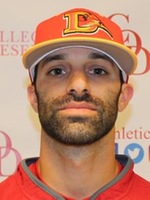 Sam is currently the Head Coach at College of the Desert, a Community College in Palm Desert, CA.

Sam led the Jacks to a PSCL Championship in his first season as Manager in 2019. He has also worked as the Hitting Coach for the Palm Springs Power (2017-2019) and was a part of 2 championship Power teams.

Sam played 6 years professionally, signing as a free agent with the Washington Nationals after his senior season. He was a D2 All-American at California University of Pennsylvania